Puerto Rico is in the News TODAY

A segment in this morning’s NBC’s Today show discussed Puerto Rico’s $70 billion public debt, poverty rates of 45% and more than 150 school closures over the past few years. As a result of the financial crisis, 84,000 Puerto Ricans migrated to the mainland in 2014 and an average of a physician per day leaves the island due to hospital closures and the government’s inability to pay insurance claims. More basic necessities may be lost as the situation deteriorates.

The Today show highlighted Lin-Manuel Miranda’s heartfelt plea to Congress last month to work on a solution. He urged Congress to pass legislation that would allow the U.S. territory to restructure its crushing debt. The Pulitzer Prize-winning Hamilton creator is the son of Puerto Rican parents who as a child would spend a month every year in his grandparents' home in Vega Alta, PR. Lin-Manuel is an American actor, composer, rapper and writer, best known for creating and starring in the Broadway musicals In the Heights and Hamilton. Miranda wrote the music and lyrics for the musical In the Heights, earning him numerous accolades, including the 2008 Tony Award for Best Original Score[1] and the 2009 Grammy Award for Best Musical Theater Album. Miranda's performance in the show's lead role of Usnavi earned him a nomination for the Tony Award for Best Actor in a Musical. Miranda is currently performing on Broadway in the lead role of Alexander Hamilton in Hamilton, a musical for which he wrote the book, music and lyrics—and which earned the 2016 Pulitzer Prize for Drama and the 2016 Grammy for Best Musical Theater Album. The show is currently nominated for 16 Tony Awards, the winners of which will be announced on June 12, 2016. Miranda is a 2015 recipient of the MacArthur "Genius" Award.

John Oliver spent the majority of a Last Week Tonight 's episode explaining the island's problems and possible solutions. "The point is, 3.5 million Americans are facing a dire crisis right now, and the clock is ticking," Oliver said. "There are certainly better voices than mine to speak on behalf of Puerto Rico." At that point Lin-Manuel Miranda delivered a political-themed rap about the how America can help its most prominent territory. Check out the link below. At the end of the article watch the segment titled Last Week Tonight with John Oliver: Puerto Rico (HBO). It is about 21 minutes long as it amusingly summarizes the factors that lead to the financial crisis in PR. Miranda’s rap song plays at the end of the segment (at the 19 minutes mark). http://www.billboard.com/articles/news/7341830/watch-john-oliver-lin-manuel-miranda-rap-puerto-rico-deb 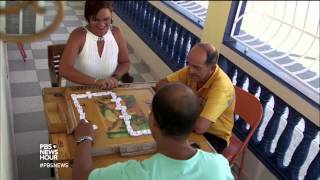